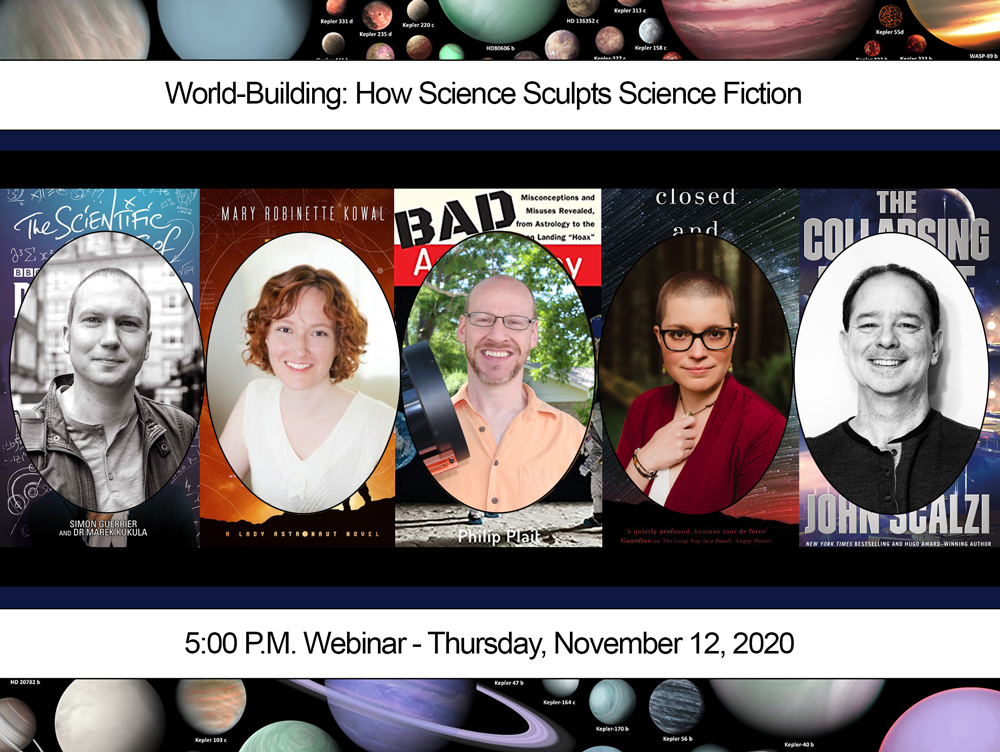 This panel is sponsored by IPAC and the Keck Institute for Space Studies.

How do science fiction authors create their fantastical new worlds? How are they impacted by the latest scientific discoveries about exoplanets (planets outside of our solar systems)?

Join us for a panel of pre-eminent science fiction authors famous for their vivid imaginings of fantastical, fictional worlds as they describe their favorite fictional world, and then discuss the process of inventing a new world.  Where do they take ideas from reality? Where do they choose to deviate from reality, and why? When does story trump science? What are the hardest and easiest parts of a brand new world for them to imagine? And finally, what responsibility do writers have when it comes to the public's science literacy?

Moderated by Phil Plait, an astronomer, science communicator, and author of several astronomy books, the panel will feature Hugo award winners Becky Chambers, Mary Robinette Kowal, and John Scalzi, as well as Doctor Who writer Simon Guerrier. The panel will conclude with a moderated Q&A with the audience and the panel members.

Phil Plait is an astronomer, science communicator, and author of several astronomy books. He writes the Bad Astronomy blog for SYFYWire, was the head writer for season 1 of "Bill Nye Saves the World" on Netflix, and also wrote and hosted Crash Course Astronomy, which currently has over 55 million views on YouTube.

Becky Chambers is a science fiction author based in Northern California. She is best known for her Hugo Award-winning Wayfarers series, which currently includes The Long Way to a Small, Angry Planet, A Closed and Common Orbit, and Record of a Spaceborn Few. Her books have also been nominated for the Arthur C. Clarke Award, the Locus Award, and the Women's Prize for Fiction, among others. Her most recently published work is To Be Taught, If Fortunate, a standalone novella.

Becky has a background in performing arts, and grew up in a family heavily involved in space science. She spends her free time playing video and tabletop games, keeping bees, and looking through her telescope. Having hopped around the world a bit, she’s now back in her home state, where she lives with her wife. She hopes to see Earth from orbit one day.

Mary Robinette Kowal is the author of the Lady Astronaut series and historical fantasy novels: The Glamourist Histories series and Ghost Talkers. She’s the President of SFWA, a member of the award-winning podcast Writing Excuses and has received the Astounding Award for Best New Writer, four Hugo awards, the RT Reviews award for Best Fantasy Novel, the Nebula, and Locus awards. Stories have appeared in Strange Horizons, Asimov’s, several Year’s Best anthologies and her collections Word Puppets and Scenting the Dark and Other Stories. Her novel Calculating Stars is one of only eighteen novels to win the Hugo, Nebula and Locus awards in a single year.

As a professional puppeteer and voice actor (SAG/AFTRA), Mary Robinette has performed for LazyTown (CBS), the Center for Puppetry Arts, Jim Henson Pictures, and founded Other Hand Productions. Her designs have garnered two UNIMA-USA Citations of Excellence, the highest award an American puppeteer can achieve. She records fiction for authors such as Seanan McGuire, Cory Doctorow and John Scalzi.

John Scalzi is the New York Times bestselling and Hugo Award-winning author of Old Man's War, Redshirts, and the Interdependency series. He is also the author of the astronomy book The Rough Guide to the Universe. He lives in Ohio where he can see the Milky Way from his porch.

Simon Guerrier is the author of countless Doctor Who audio adventures, books and comics, and took a night class in astronomy to try and get the details in his stories right. He’s made a number of documentaries for BBC Radio 3 including one on HG Wells and the H-bomb, and was a guest on science-panel show The Infinite Monkey Cage for Radio 4. Simon is the creator of the science-fiction series Graceless and writes regularly for the official Doctor Who Magazine and the medical journal Lancet Psychiatry. His next book is The Story of the Solar System, edited by Maggie Aderin-Pocock and published by BBC Books in April 2021. On Twitter, he is @0tralala.