Christopher Martin (The Principal Investigator of the NASA GALEX Mission)

We are exploiting the first 9‐12 months in 2012 to complete the newly accessible Milky Way Galactic Plane. We call this the GALEX Complete the Sky Survey (GCSS). NASA planned to close the GALEX mission at the end of December, 2011. A large portion of the Galactic Plane, which we have only recently begun to survey, will have no data. NASA, recognizing the scientific value of the Galactic Plane survey, encouraged the project to seek outside funding for completing the Survey. The Keck Institute for Space Studies was the first organization to provide partial funding for this important project. 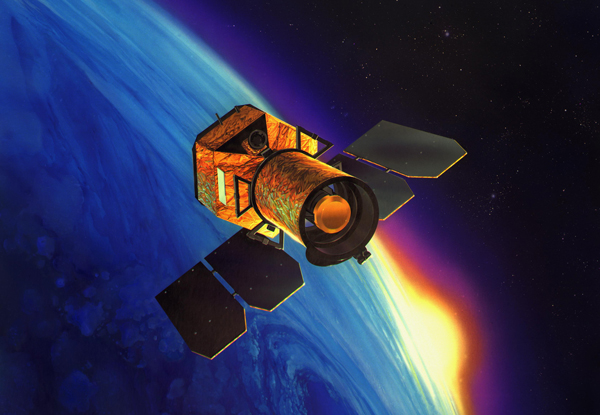 The GALEX Complete the Sky Survey will complete the Galactic Plane survey, areas shown in white (see figure below).

While GALEX has been optimized for extragalactic observations, our coverage of the Milky Way Galactic Plane has been limited by countrate limits set to protect the life of the Near UV photon‐counting detector at 100 kcps. We have increased those limits to 1 Mcps—the resulting data quality is still very high and comparable to lower countrate observations. By raising the limits, and in some cases imposing no limits, we are now in a position to fill in the Galactic Plane and the remaining unobserved parts of the Magellenic Clouds that have exceeded the 1 Mcps limits. 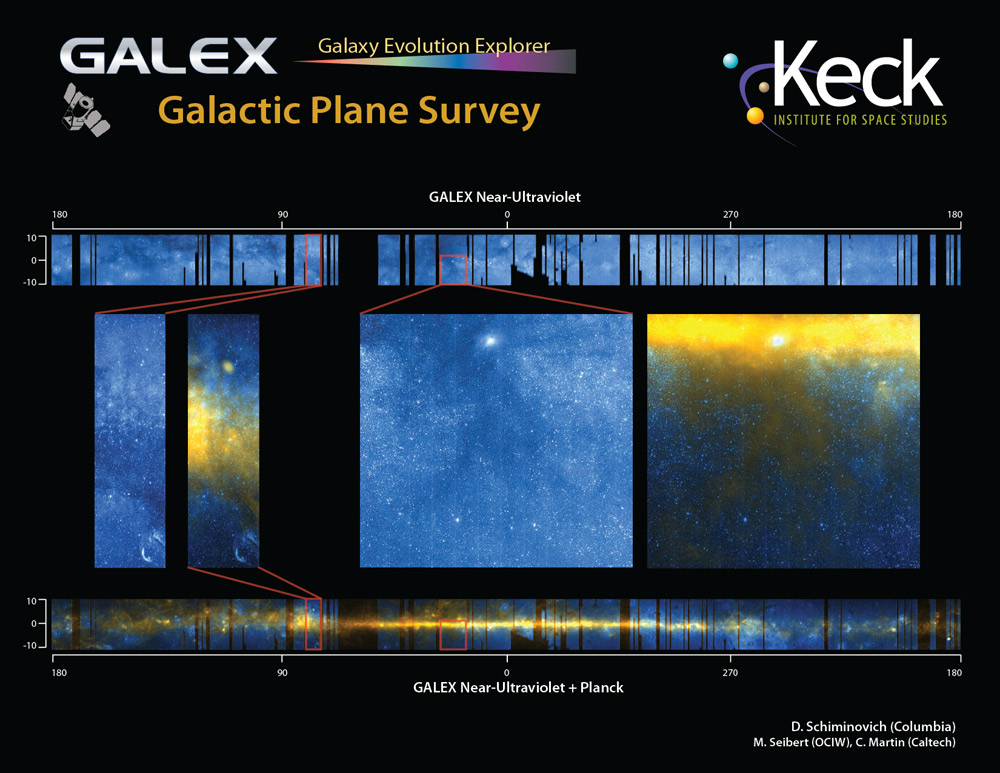 (Above) Image of the Galaxy Evolution Explorer Survey (GALEX) of the Galactic Plane, the first high resolution map of the Milky Way obtained at ultraviolet wavelengths. The full images shown at top and bottom are 7200 square degrees (360x20). The zoom-ins are 100 square degrees. Visible in the images are striking stellar clusters, wisps of emission from supernova remnants, including the Cygnus Loop, and pronounced dusty absorption features surrounding star-forming regions and molecular clouds in the disk out the Galaxy. Dust is traced by sub-millimeter data from the Planck satellite, also shown in gold on the overlay. Data analysis is in progress, but this survey has already turned up thousands of sources and features which are ideal for follow-up using the Hubble Space Telescope and Keck. All images are shown with 1 arc minute pixels although the data from the full survey has x10 higher angular resolution. The GALEX survey of the Galactic Plane was made possible by a generous contribution from the Keck Institute for Space Studies. Image Credit: D. Schiminovich (Columbia), M. Seibert (OCIW) and GALEX science team, led by Prof. C. Martin at Caltech.