The goals of this technical development work are to:

The JPL components of the Technical Study encompass remote sensing of megacity GHG emissions and advanced atmospheric modeling to support analysis of the remote sensing measurements.

The FY2015 RTD task “High-resolution Regional-scale Greenhouse Gas Flux Estimation” is designed to deliver ~1 km resolution simulations of CO2 fields over the LA basin for comparison with remote sensing and in situ measurements. Upcoming work will focus on coupling the modeling framework with Liu’s Ensemble Kalman Filter (EnKF) for determination of surface-atmosphere fluxes from atmospheric measurements. 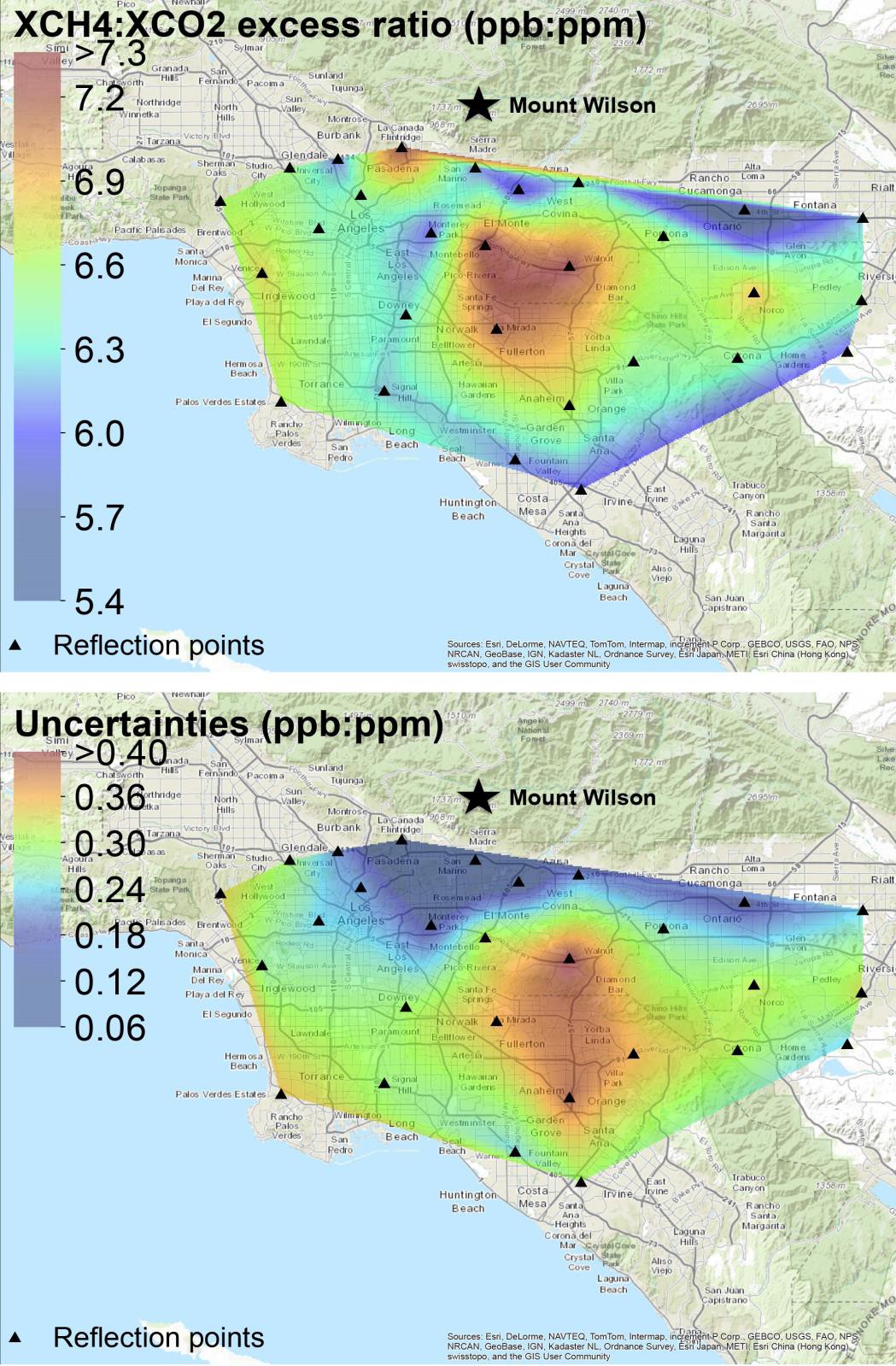 Figure 1. Maps of correlation slopes of the XCH4.XS/ :XCO2.XS/ ratio (top) and their 1 σ uncertainties (bottom) in the Los Angeles megacity observed by the CLARS-FTS during the period of September 2011 and October 2013 [Wong et al., 2015].

JPL postdoctoral fellow Kristal Verhulst, working with Dr. Annmarie Eldering, has developed tools to analyze OCO-2 observations over LA for regular nadir or glint single swath overpasses (Fig. 2) and Target mode overpasses during which up to 10,000 observations are recorded from multiple sweeps over the basin (Fig. 3). The results will be compared with highresolution modeling simulations and with data from the LA Megacity network to determine the degree and representativeness of the spatial information content in OCO-2 observations. 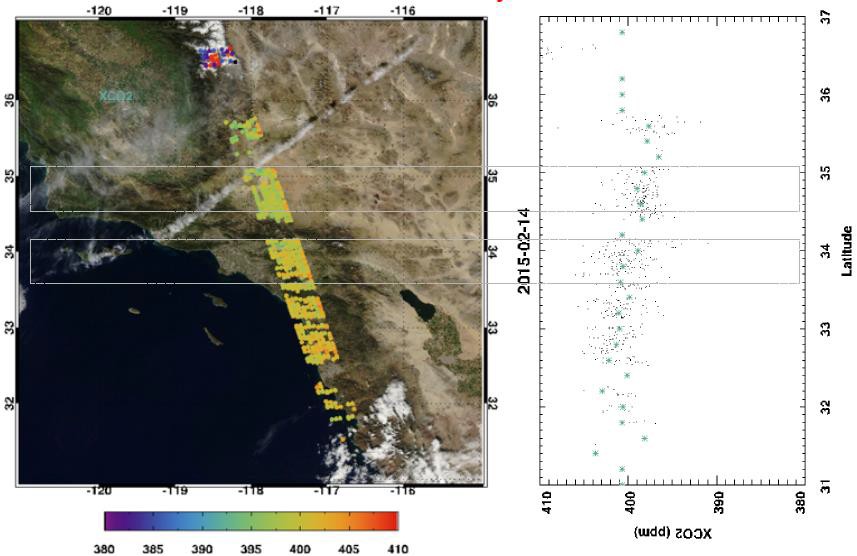 Figure 2. LEFT: OCO-2 glint mode XCO2 observations (path 140) made over the Los Angeles Basin on 2/14/15. MODIS data in the background show minimal clouds RIGHT: XCO2 values from the overflight plotted as a function of latitude. Minimal XCO2 enhancement was observed over the LA basin on this day due to the presence of strong Santa Ana winds blowing background air into the LA basin from the high desert. [Verhulst, unpublished] 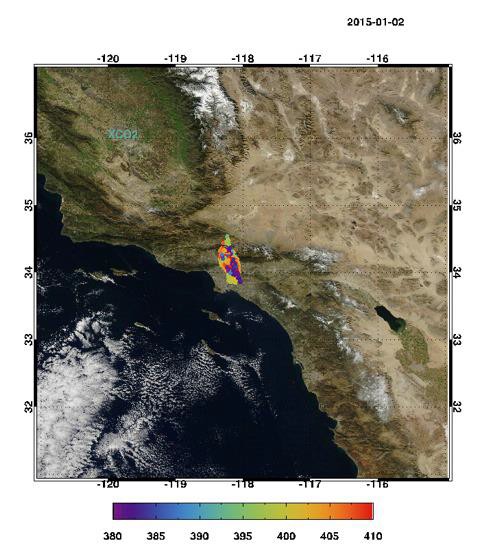 Professor Eric Kort (University of Michigan, formerly KISS Postdoctoral Fellow) and his group have completed final data analysis processing on data collected throughout the LA basin in conjunction with the UC Irvine van by the ethane/methane instrument purchased at the beginning of this project. Analysis of all emission plumes encountered indicates that “unknown” sources are dominated by fossil methane emissions rather than microbially sourced emissions. A manuscript has been prepared and is in revision (Hopkins et al., in revision).

Professor Kort and coworkers have integrated the ethane instrument for airborne deployment, and have now deployed it on both a Mooney aircraft and the NOAA Twin Otter, collecting almost 150 flight hours of data. Observations of ethane:methane have been made over Texas, Colorado, North Dakota, and New Mexico. We are finding unique and distinctive ethane:methane ratios present in these different locations, and are devising new ways to use these observations to partition methane emissions between different source types. We have a manuscript in revision with ES&T demonstrating some of the first airborne ethane:methane observations: quantifying regional ethane emissions and highlighting the ability to distinguish between different source types (Smith et al., in revision).

In conjunction with Professor Kevin Gurney of Arizona State University, JPL postdoctoral fellow Preeti Rao has completed the on-road portion of the Hestia product, which is about to be released. This product will be critical input to the WRF-CHEM modeling being done by postdoctoral fellow Sha Feng and JPL scientist Thomas Lauvaux (about to leave for a position at Penn State). Dr. Feng has run WRF-CHEM using the VULCAN emissions and the preliminary HESTIA product and shown that HESTIA is required in order to see details in the spatial variability of CO2 mixing ratios.

JPL postdoctoral fellows Kristal Verhulst and Francesca Hopkins have begun comparing results from eight sites in the growing Megacities network. The selection of the background site, whether Victorville, northeast of the Los Angeles, or San Clemente Island, southwest in the ocean, depends on wind conditions. During the Santa Ana conditions in January 2015, the ocean site saw elevation of CO2 (~20 ppm) and CO (~100 ppb) concentrations, due to transport of emissions from the basin.

Caltech scientist Sally Newman continues our monitoring of CO2, δ13C, δ18O, ∆14C, CO, CH4, and N2O at our Pasadena ground site and CO2, δ13C, δ18O, and ∆14C on coastal Palos Verdes peninsula, with partial funding through June 2015 from the California Air Resources Board. Our latest results from the flask measurements of ∆14C show an ~10% decrease in CO2 emissions from fossil fuel combustion during the Great Recession (2007-2010), very similar to that shown by the bottom-up inventory developed by the California Air Resources Board (CARB). We have a manuscript that is close to submission. Our continuous measurements of CO2, δ13C, and CO indicate that there is not only seasonal variation, but also diurnal variation in source attribution, with mornings being characterized by different proportions of emissions sources (gasoline combustion, natural gas combustion, and biosphere respiration) than mid-day periods and evenings at different times of year.

Post-doctoral fellow Camille Viatte and graduate student Jacob Hedelius have been working on testing a recently obtained (May 2014) mobile FTS (EM27SUN, Bruker). Various measurements and tests have been undertaken to ensure accurate and precise observations of the dry air mole fraction of CO2, CH4, CO, and N2O. To validate our instrument, side-by-side measurements have been performed with the Caltech TCCON instrument. To date we have the longest known comparison of an EM27SUN with TCCON (Fig. 4). 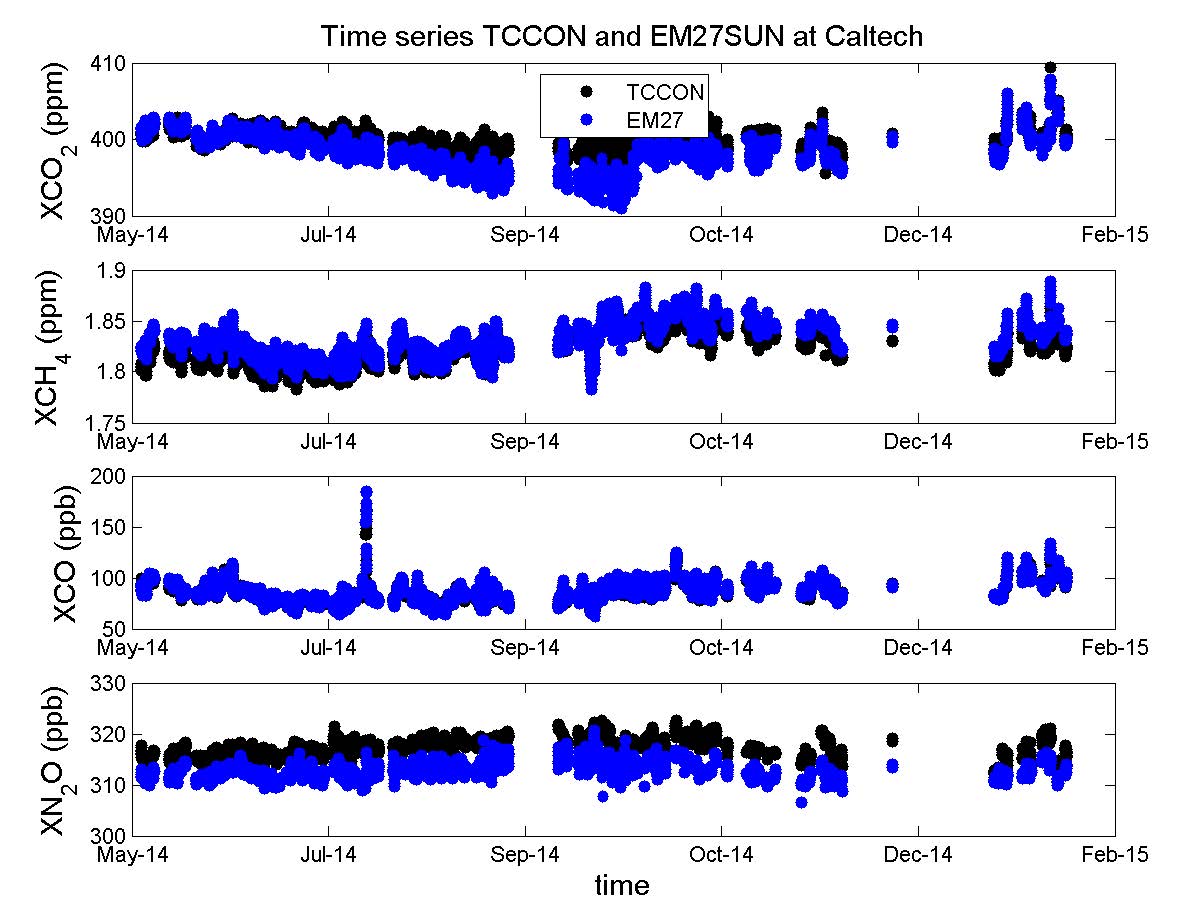 In the frame of OCO-2 validation, our validated mobile FTS has provided supplemental XCO2 measurements in the Pasadena area coinciding with several of the times when OCO-2 has targeted the Caltech TCCON site (Fig. 5). 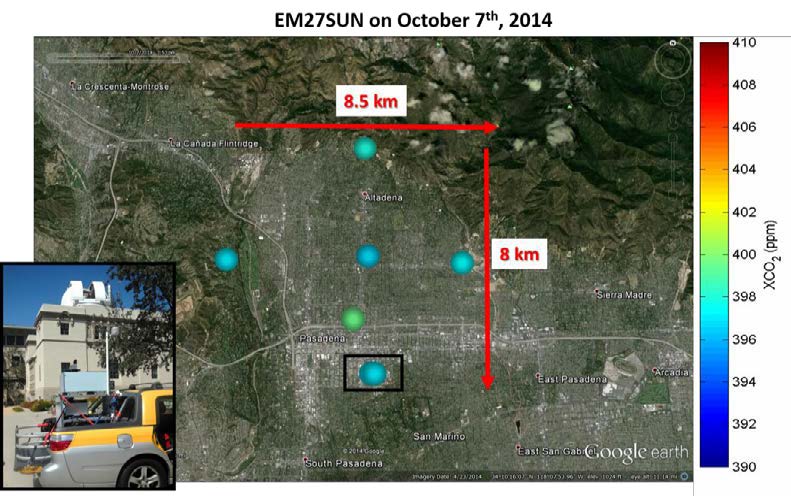 Figure 5: Example of deployment of the mobile EM27SUN on October 7th, when OCO-2 targeted the TCCON Pasadena.

In order to improve XCO2 emissions in the atmospheric model, simultaneous column measurements (EM27SUN and TCCON) have been compared to the WRF (Weather Research and Forecasting) outputs. Figure 6 shows the time series of XCO2 measured and modeled at different locations in the Pasadena area on January 27th. 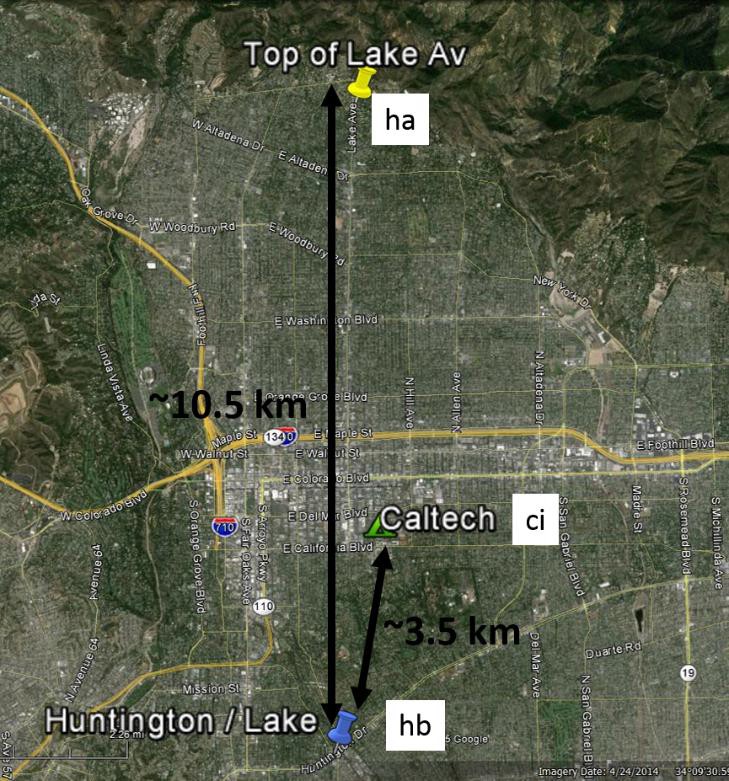 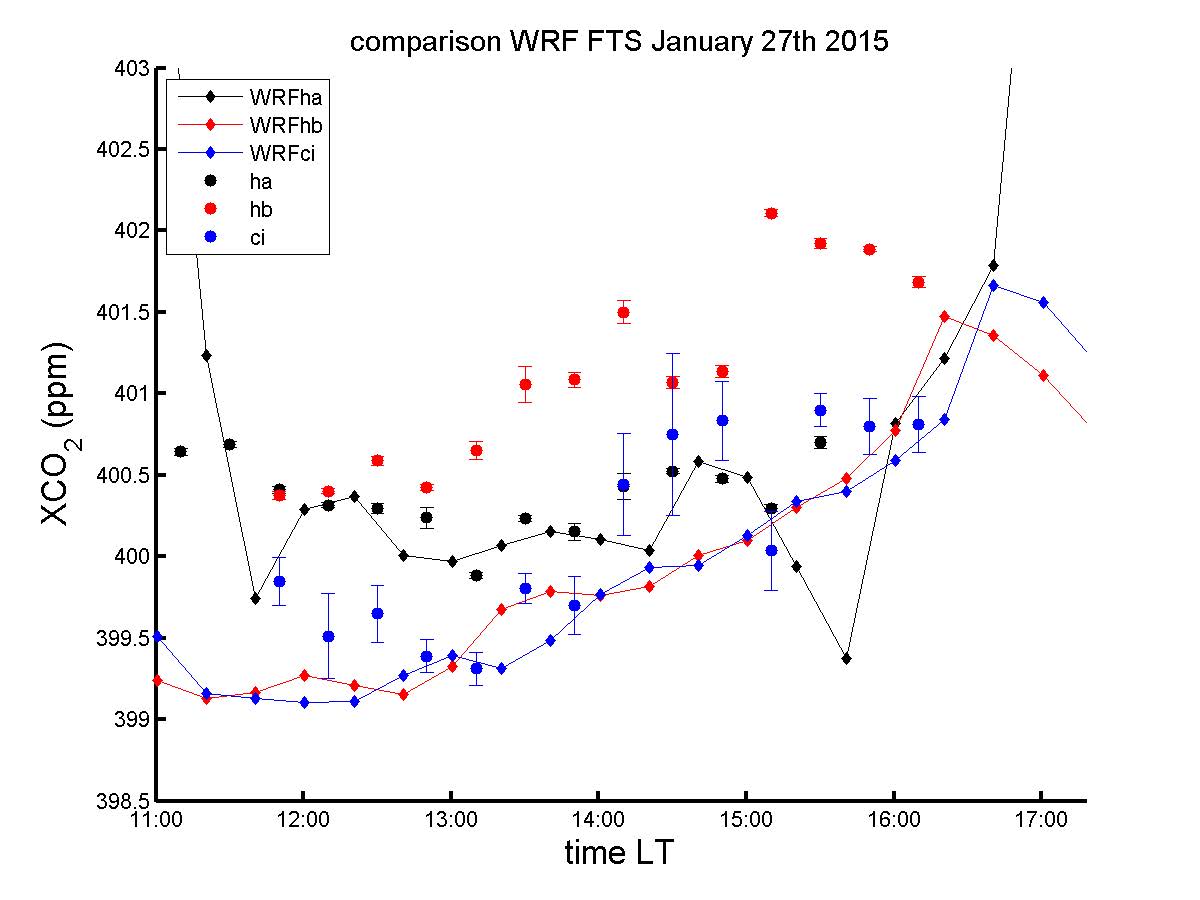 In January 2015, we hosted an intensive measurements campaign at Caltech. This campaign gathered four mobile EM27SUN in order to:

Figure 7 shows the primary results of the field campaign. Coupling these column measurements with meteorological observations (such as winds direction and speed, as well as planetary boundary layer high), and WRF-Large Eddy Simulations will allow us assessing the fluxes of methane. 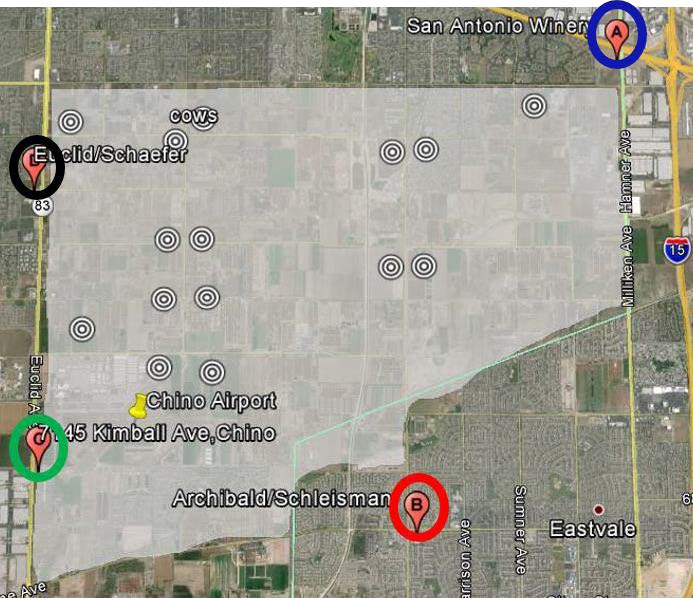 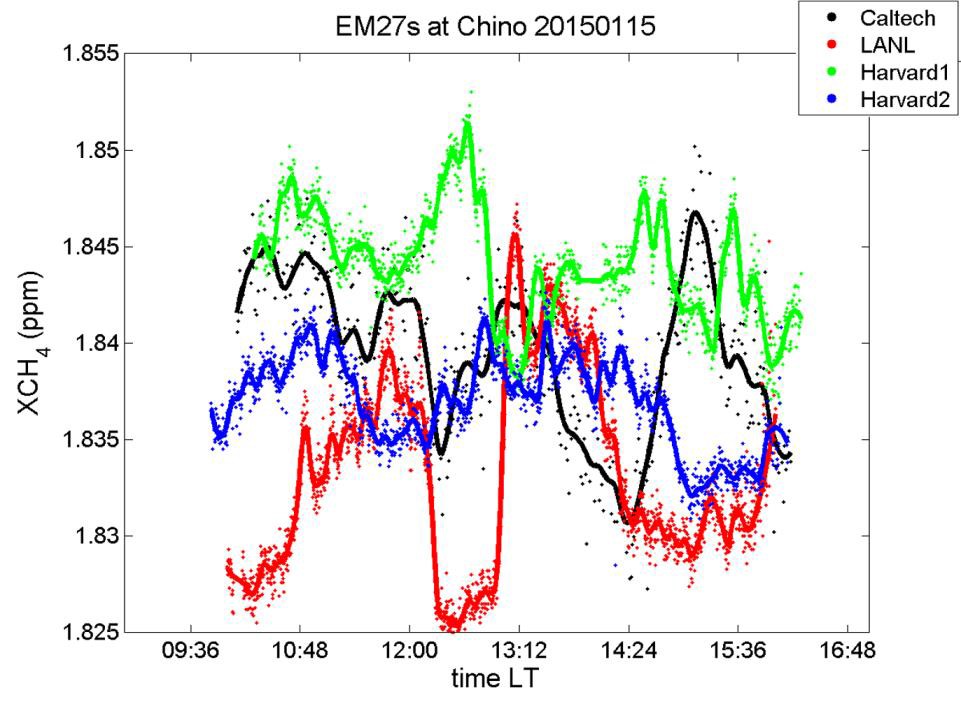 Figure 7: Primary results of the January 2015 field campaign: Time series of XCH4 measured at four different corners of the Chino dairy farms on January 15th, 2015. Four FTS instruments were part of this campaign, as indicated in the legend of the bottom panel.

Our ESE graduate student, Qiong Zhang, has continued his work on understanding biases introduced by the presence of aerosols to spectra collected by the Fourier Transform spectrometer (FTS) on Mt. Wilson at the California Laboratory for Atmospheric Remote Sensing (CLARS). Simply using the ratios of CO2 to O2 does not remove all of the biases due to aerosols. He has developed an operational algorithm for correcting the spectra to mitigate the observed biases. Figure 8 shows how the measured slant column densities (SCD) of CO2 and O2 vary over the course of a day as aerosols build up in the atmosphere. He has a manuscript in revision. 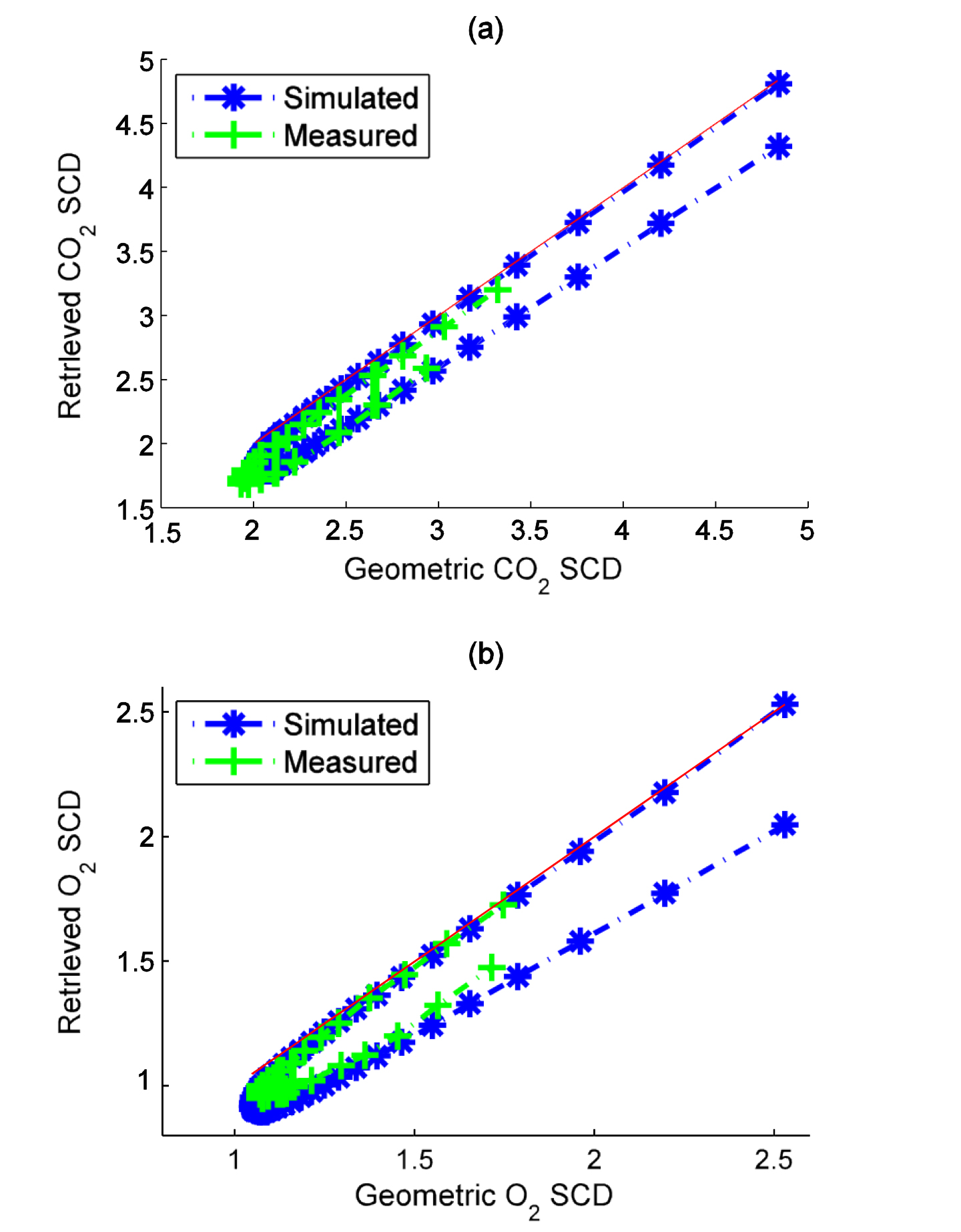 Figure 8. Comparison between the simulated and measured SCD daily variations on 23 March 2013 in West Pasadena for (a) CO2 SCD and (b) O2 SCD. Units for the CO2 and O2 SCDs are scaled as in Figure 2. The red lines indicate 1:1 correspondence between measured and geometric SCDs.

ESE graduate student Xi Xi has continued her work using Observing System Simulation Experiments (OSSEs) and the geometry and instrument parameters of the Geostationary Carbon Process Investigation (GCPI) to investigate simultaneous retrievals of CO2, CH4, CO, and H2O. She has reduced the uncertainties by over 90% for all but CO, for which the uncertainty reduction is approximately 50%. She is working on retrieving some vertical profile information for all but CO, and has concluded that she will be able to get mixing ratios for two layers. She has a manuscript in revision.